Puerto Escondido is a small coastal village in the state of Oaxaca (Wha-ha-cah), Mexico located approximately 200 miles south of Acapulco. Puerto Escondido is known for its beautiful beaches, its coastal culture and variety of activities including world class surfing, sport fishing and diving. In recent years, Puerto Escondido has attracted the attention of international travelers. Flights now arrive daily into Puerto Escondido's international airport from Mexico City, Oaxaca and Huatulco. Despite this increase in traffic, Puerto Escondido has managed to preserve an "off-the-beaten-path," authentic feel while at the same time providing the amenities and security that make for a safe and pleasant visit. All this and much more makes Puerto Escondido a perfect place to immerse yourself in the Spanish language and Mexican culture. 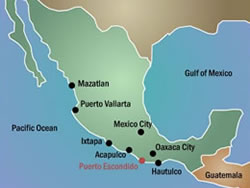 Getting to Puerto Escondido

Puerto Escondido has it own international airport with flights arriving daily from Mexico City, Oaxaca and Huatulco, but if you want to save some money and/or see more of the countryside, there are other options available. Bus service in Mexico is easily accessible, nice, reliable, safe and very comfortable. However, taking a direct and/or first class bus is recommended and night buses are also an option.

While Puerto Escondido has its own international airport, no international flight currently fly into Puerto Escondido so you will need to fly first to Mexico City or Oaxaca and then on to Puerto Escondido. Vivaaerobus (the most affordable option but with the most restrictive baggage policies) www.vivaaerobus.com/en, interjet (mid-priced but allows two free 25 kilo pieces of luggage) www.interjet.com and Aeromar (most expensive but the only one that will show up on meta search travel sights like Kayak, Expedia, Travelocity…) www.aeromar.com are presently the only airlines that fly from Mexico City into Puerto Escondido. Flights cost between $40-$225 $U.S. each way (depending on the airline, the season and the exchange rate).

To catch your connecting flight to Puerto Escondido from Mexico City, it's a good idea to give yourself an hour or two layover to assure that you will have time to pass through immigration and customs before you check back into your airline for the flight on to Puerto Escondido. If you can't get into Mexico City with enough layover time to catch your flight on to Puerto, you can spend the night in Mexico City (write us for information on lodging options), take an overnight bus to Puerto Escondido or you might consider flying to (Las Bahias de) Huatulco. Currently there are direct flights from Huston, Texas to Huatulco which is only a 2 hour bus or taxi ride from Puerto.

The quickest and easiest way to get from Oaxaca City to Puerto Escondido is to fly. Aerovega or Aerotulcan which offer beautiful 20 minute flights over the Sierra Madre Mountains of Oaxaca for around over $150 each way. 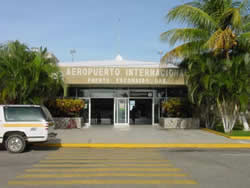 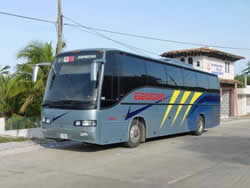 By Bus From Mexico City

Each day and night the Estrella Blanca bus line has direct and semi-direct buses departing from Mexico City to Puerto Escondido. All of Estrella Blanca’s buses leave out of El Centro Camionero Sur. Bus lines departing from other stations, like the Cristobal Colon bus line, often take a considerably longer route to get to Puerto Escondido. You can get to el Centro Camionero Sur by metro from most parts of the city, including the airport (metro stop: Tasqueño), but if you have a lot of luggage or arrive during rush hours, taking a registered taxi may be better.

By Bus From Oaxaca City

If you want a more affordable option, there are suburbans/vans that can be contracted from the travel agents in the Zocalo in Oaxaca City that will get you to Puerto in 6 hours. This is the quickest of the land routes but because the route brings you from about 1,000 meters in Oaxaca City up to 3,000 m and back down to sea level within 300km as the crow flies, many claim that it's a hair raising experience going through the curvy mountain roads.

The regular buses from Oaxaca City to Puerto Escondido go a little slower. Those busses take about 8 hours but it's also a curvy route so it's advisable to take a 1st class bus and if you are at all prone to motion sickness, it's a good idea to take Dramamine at least a half an hour before you take either the bus or a suburban/van.

The only way to avoid the sharp curves of the mountain roads if you want go by land is to take a bus from the Christobal Colon bus line which departs from a separate bus station and routes through Salina Cruz. Their route goes around the steepest mountains and takes about 14 hours but it’s much less curvy. 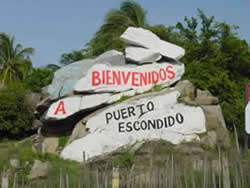 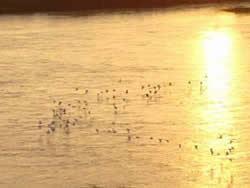 Over the recent year there has been a lot of bad publicity about Mexico and while some of it was well founded, it was never as widespread as the media made it appear. Starting in the early 2000’s the border areas in northern Mexico and more recently in the states of Guerrero and Michoacán had become a hot bed of organized crime activity. Luckily, even at its peak most of the violence was between rivaling cartels as they struggled over routes to traffic drugs and undocumented workers into the U.S. In recent years while the criminal activity continues the violence has diminished.

Starting in the 1990’s, Mexico City developed into one of the kidnapping capitals of the world. However, the installation on video surveillance cameras on most street corners has helped great reduce crime in the area. Also, Mexico City with its 20,000,000+ inhabitants, Northern Mexico with its proximity to the U.S. drug market and the states of Sinaloa, Michoacán and Guerrero where the cartels are based are extremely different places from Puerto Escondido, Oaxaca.

The area around Puerto Escondido is being groomed to become the next major tourist destination in Mexico, la Riviera Oxaqueña. Luckily for those of us that enjoy Puerto Escondido as it is, it's still a semi off the radar location with real old school Mexican flavor. However, the local, state and federal authorities don't want anything to happen here that might negatively affect their budding investments.

The isolation of Puerto, 6 hours from the nearest big city, Oaxaca City, 8 hours from Acapulco and 12 hours from either Mexico City or the Guatemalan border has also helped keep its small town feel and has contributed to its safety. Here in Puerto we don't have to worry about the hassles of the big city crimes nor the problems that come with living too close to an international boarder. While there is occasionally some minor crime in Puerto, it's almost exclusively nonviolent petty theft; if you leave your bag unattended on the beach and don’t ask someone to watch it for you when you go out for a surf or a swim, there is a slight chance that it may not be there when you get back but unless you go out very late at night in the worst (and hardest to get to) parts of town, nothing should happen to you personally. Muggings, pick pocketing, and violent crimes against tourist are almost unheard of so if you take the precautions that you would almost anywhere else around the world, chances of anything really bad happening are very slim. All in all, Puerto is a lot safer that most American or European cities.

The months of June through September make up the heart of the rainy season and coincidentally the best season for big wave surfing. While it can rain torrentially during these months, it doesn't rain all the time. Usually it rains for two or three semi-solid days every couple of weeks. The rain can cool the air into the mid 70s and cause the coldest days of the year. It may also rain for an hour or two in the late afternoon one or two additional days each week but for the most part, summer is sunny and warm.

As the rainy season draws to an end in October, the skies clear and the temperature begins to drop. November through February, the skies are blue and temperatures range from 60s at night to 80s during the day.

In late February and early March, temperatures begin to climb into the 90s with clear skies. In June, the rain starts to fall again. It cools the air and moistens the soil turning everything green again. 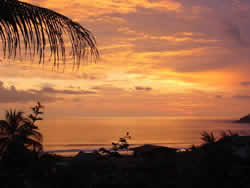 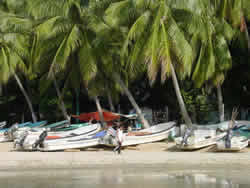 What to do in Puerto Escondido

While surfing is one of the main attractions in Puerto Escondido, there are a variety of other activities in the area. There are "lancha" (small fishing boat) tours of nearby lagoons and wildlife preserves. There are hikes to waterfalls and thermal springs. There are also plenty of "lanchas" to bring you sport fishing, scuba diving, touring the coast or to just tow you around on inflatable "bananas." Protected coves like Carrizalillo provide great opportunities for snorkeling and swimming. Playa Carrizalillo with its gentle waves is also a perfect place for anyone to boogie board or learn to surf. Both snorkeling equipment and boogie boards are available to rent there for very affordable prices. If you already know how to surf, Playa Zicatela, "Mexican pipeline" provides one of the most challenging waves in the world. "La Punta," is also a quality surf break. Located at the southwestern end of Playa Zicatela, it's a long left point break great for intermediate surfers or for when the beach break becomes to big for the expert surfer's board or ability.

There are plenty of attractions in nearby cities and towns. If you want to get a feel for Mexico completely unchanged by tourism, there are many small Mexican and indigenous villages within an hour's drive of Puerto. In opposition Las Bahias de Huatulco, about 2 hours south of Puerto Escondido, has been developed as a huge luxury tourist attraction and now houses the western hemisphere's largest Club Med. The state capital, Oaxaca City is about 6 hours away by bus and 30 minutes away by plane. There are plenty of ruins, markets, museums and indigenous villages to visit there as well.